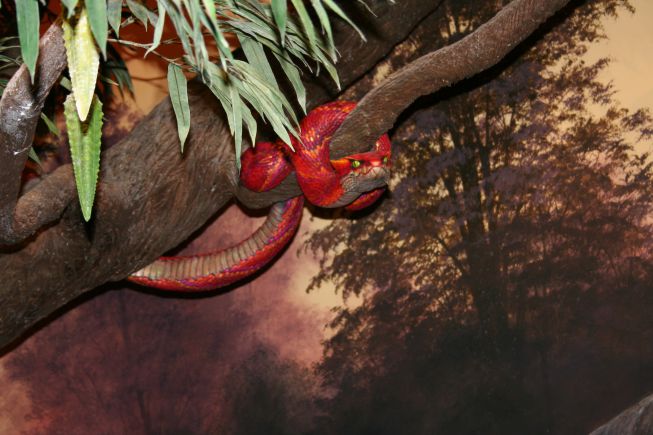 In Genesis 3 we find the story of The Fall.  We see a character enter the creation named Satan who takes the form of a serpent and tempts Eve.  In this brief encounter we can identify several tactics used by Satan in his wooing of Eve. The truth is, the tactics identified here are really the exact same tactics the Evil One uses today in luring us.  We can learn something of both the essence of sin and of temptation.  Notice them with me.

1. Satan is a chameleon.

When we think of Satan, we often picture him the way Hollywood would depict him, gnarly with a red suit, horns and a pitchfork.  But Scripture describes him as one who “disguises himself as an angel of light” (2 Corinthians 11:14).  In Genesis 3 he approaches Eve in the form of a serpent.  Now, for us, that may seem scary.  But for Eve, the serpent would have just been another one of God’s creation in the garden.  Satan knew she was comfortable with all the living creatures there, so he disguised himself, taking the form of something she would have trusted.

We can tell that from simply reading his exchange with Eve.  Scripture also refers to him as “the father of lies” (John 8:44).  When he lies, he is speaking his native tongue.  We can say that deception is his heart language.  And he is fluent.  Graeme Goldsworthy notes, “The snake speaks only twice, but that is enough to offset the balance of trust and obedience between the woman and the Creator.”

3. Satan is an historical revisionist.

He twists truth, especially historical truth.  His first words to the woman are not even really a lie.  Have you ever noticed that?  Instead, he begins to cause Eve to question what she has known to be true up until this moment.  “Did God actually say?” he poses.  He loves to speak confusion into clarity.  I believe this is why remembrance is one of the major themes throughout the Scriptures.  God calls us to remember.  Because when we forget, we become vulnerable to the enemy’s most pernicious lies.

4. Satan’s chief desire is not to be worshiped.

Again, Goldsworthy expounds, “The snake does not suggest that the humans transfer allegiance from God to himself, but only that they themselves should consider and evaluate God’s claim to truth.”  Satan is not interested in our worship or allegiance.  His goal is our unbelief.  He desires for us to question God and His Word.  This is one reason why we must preach the gospel to ourselves every day.  We must continually remind ourselves of all that is ours in Christ.  We must not wander too far from that truth, or else we might become susceptible to doubt and confusion as to the truth.

5. Satan desires for us to question the goodness of God.

“Did God really say, ‘You shall not eat of any tree in the garden?'” (Genesis 3:1b)  There are a couple of interesting elements to that question.  First, he connects the negative command with our deepest pursuits of personal happiness.  This is HUGE for us now.  It’s almost as if Satan indicates that God can’t possibly be good if he is actually telling people they can not do something.  How can he be good and burden people with oppressive rules!?  In a culture where personal happiness has become the chief virtue, this may be the greatest way Satan’s deception thrives in our day.  Second, he inflates the negative command.  God never told them that they couldn’t eat of any tree in the garden  On the contrary, he graciously gave them access to every other tree in the garden except the forbidden on (Genesis 2:16-17)!  You see what Satan did there?  It’s as if he wishes for Eve to completely forget every good thing she has and every blessing God has granted her.  In forgetting all that, Satan plants the lie that if she cannot eat of that one forbidden tree, she doesn’t really have anything at all!  How true is this same ploy today for us and our covetous hearts!

6. Satan desires for us to question the trustworthiness of God.

God told Adam that if anyone were to eat of the tree they would die.  Now Satan indicates that God is in fact the one who seeks to deceive (Genesis 3:4-5).  He lures the woman into the forbidden by causing her to wonder if what has been deemed bad by God really exists as the greatest vehicle to greater fulfillment.  Del Tackett, of Focus on the Family’s The Truth Project, asserts, “Satan lessens the seriousness of sin and even beautifies it.  He promises that sin will lead to liberation and self-actualization.”  But, he continues, “Sin never leads to freedom,” as both the woman and man would soon find out.  The same is true for us.

Notice that the fruit of the tree began to appeal to Eve in 3 ways: physically, it was good for food; aesthetically, it was pleasing to the eye; and intellectually, it was good for making one wise.  Satan’s lures are always hollow.  They are always traps set for our destruction.  They never satisfy and they never fulfill.  Interestingly, the warning of 1 John 2:15-17 includes all three of these appeals.  “Do not love the world or the things in the world.  If anyone loves the world, the love of the Father is not in him.  For all that is in the world–the desires of the flesh [it was good for food] and the desires of the eyes [it was pleasing to the eye] and the pride in possessions [it was good for granting one wisdom & knowledge]–is not from the Father but is from the world.  And the world is passing away along with its desires, but whoever does the will of God abides forever.”

8. All that Satan offers is already ours in God!

Do you see the irony in the statement Satan makes to Eve when he alleges, “you will be like God” (Genesis 3:5)?  God had created Eve in his own image!  She already had what Satan dangled in all the fulness of God’s created beauty; yet, Satan made her forget what she had and strive for what could never be hers in the treasonous form it was offered.

9. The essence of sin is found in the heart, not in the action.

The essence of Eve’s sin does not include the taking a bite of a piece of fruit from a forbidden tree.  The first sin took place in her heart.  The same is true for us.  The sinful actions exist as outward manifestations of what has already taken place in our hearts.  Before she took the bite, Eve had made up her mind that she no longer trusted God.  She no longer contented herself in submitting to her Creator’s authority.  She decided that she would rather be her own authority.  Up until this point God had been the one to deem certain things good (as at the end of each day of creation) and certain things bad (the tree of the knowledge of good and evil).  But now we see Eve make such a declaration.  “So when the woman saw that the tree was good…” (Genesis 3:6).  We sin when we decide to stop submitting to God’s authority and become our own authority.  And that is because of the last point…

10. “Every sin that besets us can be traced back to the belief in a lie.”

Those words are offered by Tackett and carry an enormous amount of wisdom.  When we do battle with sin, it is not enough to grit our teeth, clinch our fists and muster up enough strength.  We only see our outward expressions change when the root of the issue has been thoroughly removed.  The root of all sin can be traced back to the belief in one of the Evil One’s lies.  What causes us to act sinfully?  The answer to that question will always come in the form of a lie that we have bought.

What lies have you bought?

Jason Engle I Married my bride, Erin, in 2003. We have 3 children: Emma, Elijah, and Lydia. I have served full-time on staff at Westwood Baptist Church, in Roxboro, NC, since summer of 2006 as Pastor of Students & Discipleship. I am currently enrolled at Southeastern Baptist Theological Seminary, pursuing my Doctorate of Education. I also began as a Teaching Fellow and Adjunct Professor at the College at Southeastern in the Fall of 2018.

4 thoughts on “Satan’s Tactics have Always Been the Same”

What do you think? I would love to hear your thoughts! Cancel reply